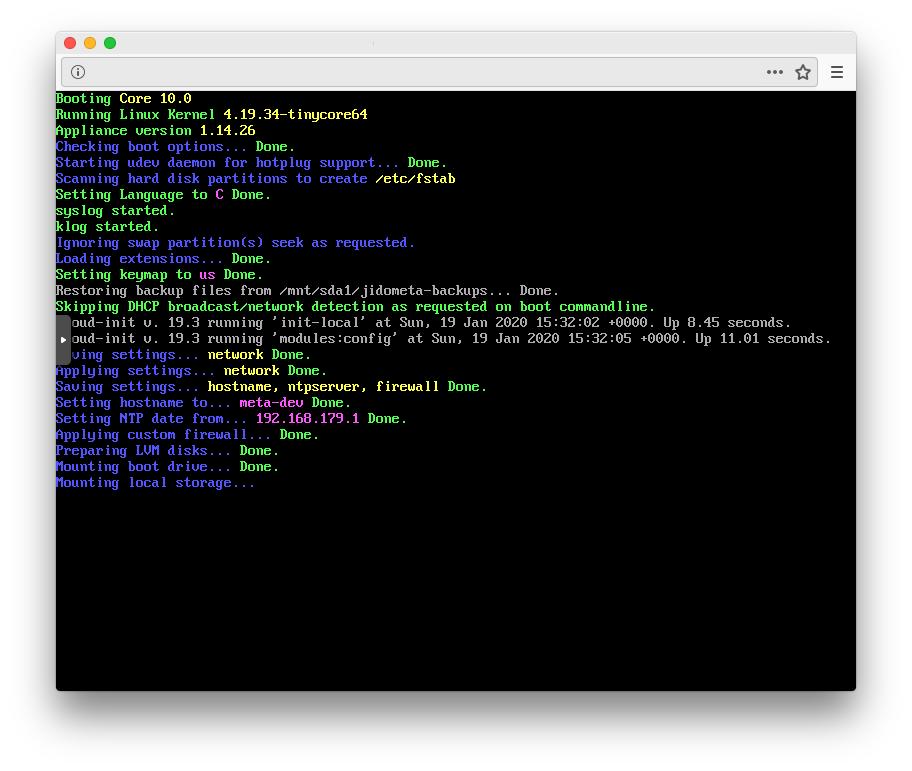 It is split into 3 sub-directories:

The current version of cloud-init (v20.2) does not support TinyCore Linux. It is designed for systems such as Debian, CentOS, FreeBSD, etc. Lack of support for TinyCore leads us to two options:

Our use-case is to support immutable On-Prem TinyCore appliances, which presents another set of problems since the system state is reset at every boot. The Python interpreter is slow and the programming language is less than ideal, so tweaking it to work for TinyCore was not a good choice.

For this reason, we've created a set of simple custom Shell scripts to handle most initialization tasks, while leveraging the few tasks cloud-init handles well, such as detecting metadata and userdata from various cloud providers. 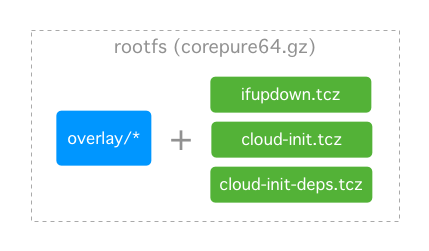 Once the overlay is added into the rootfs, only 3 extensions (and their dependencies) need to be loaded on boot. They are automatically built by GitHub Actions, and can be downloaded from Bintray:

The /opt/bootsync.sh will run cloud-init and then try to setup networking through /opt/network.sh, which is simply calling cloud-init once more with different arguments. The reason for this is to provide backward compatibility for existing On-Prem TinyCore deployments.

Each step in the cloud-init runs can be found in /etc/cloud/cloud.cfg.

The config modules are bootcmd which are the actual Shell scripts found in /etc/cloud/scripts.

What do these scripts configure

The scripts will configure the NTP server address, DNS nameservers, the hostname and hosts file, the network config for eth0, the iptables firewall, and additional storage (disk2) via LVM, NFS, or AoE.

The additional storage will not be configured unless the xfsprogs.tcz, lvm2.tcz, and nfs-utils.tcz extensions are loaded.

The data stored in /var/lib/cloud and /run/cloud-init should not be backed up, as it will prevent userdata and metadata from being altered on the Host OS, and any customized settings will not be retained on reboot.

The following files can be backed up (added to /opt/.filetool.lst):

If they are backed up, on reboot they will overwrite any values from userdata, metadata, and vendordata, and will help speed up the boot process. Customizations to values (ex: etc/hostname) will also be retained.

If they are not backed up, the initial config will take a bit more time.

The Shell scripts provided for this cloud-init deployment will read settings from various files on the system, including any userdata or vendordata provided to the system. 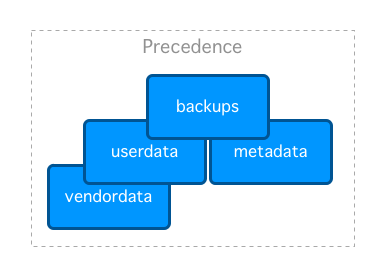 The order of precendence for reading configuration values are:

Note: Metadata is only currently used by cloud-init to configure SSH public-keys. All other metadata is ignored, but still accessible to applications running on the TinyCore Linux appliance.

Tested with EC2, Proxmox, and NoCloud, the userdata will be discovered by cloud-init and read directly from /var/lib/cloud/instance/user-data.txt. From testing, it appears cloud-init handles Base64 decoding of userdata automatically provided by EC2.

Note: Userdata is not parsed by cloud-init, but rather read manually by various Shell scripts. This means it is not possible for userdata to overwrite values from /etc/cloud/cloud.cfg, and it is not possible to provide userdata which contains a shell script or other malicious features. Userdata should only contain key: value pairs.

The vendor-data should be added to the /var/lib/cloud/seed/nocloud-net/ directory on the rootfs. It is also possible to add a network-config (v1 config) to that directory for pre-configuring the network.

All extensions are built from a Makefile under their respective directory. The extension's config values are stored in config.make (ex: version number, source URL). The extension's Open Source LICENSE file is also included.

The Makefile will load the build.make file which performs generic tasks such as adjusting file permissions, creating the .tcz squashfs file, and cleaning up.

ifupdown.tcz is taken directly from the Debian repositories, and built with a patch to remove the need for run-parts. This provides the ifup, ifdown, ifquery commands to TinyCore Linux, working with the typical Debian /etc/network/interfaces file, however it can not run scripts, for security reasons.

cloud-init.tcz is fetched from the official Canonical Cloud-Init repository, and built with standard Python 3 commands with no changes or patches. It contains the entire cloud-init installation without its dependencies.

First, it is important to load the required build tools in a TinyCore Linux environment:

To manually build an extension, cd into the directory of the extension and type:

The files should be output to $HOME/artifacts in a subdirectory with the name of the extension and version of TinyCore. It will contain a simple .info file, the md5 and sha256 hashes, the .dep files, and of course the .tcz extension file.

The GitHub workflow runs three concurrent builds, one for each extension. It downloads the JFrog CLI tool if the extension was built correctly, and uploads the files to Bintray for further review (they are not published automatically).

Everything in this repository is licensed under the MIT License, except for the LICENSE file of each individual extension.